This morning we welcomed Winston, Parker, Isla, Bella, Olive, Olivia and Matthew with lots of cuddles as they settled into their learning environment. Winston was busy pushing a car back and forth along the table and Olivia and Isla were playing with the blocks. Parker, Bella and Olive arrived. We were very excited to have Olive join us in Babies 3 for a play today. We all eagerly headed over to our room, excited to see what fun activities were set up for us to explore.

We rushed over to the table where miss Mel had set up a Dollie’s tea party. Winston, Olivia, Isla, and Parker instantly engaged in role play and began feeding the babies the play food and having a taste themselves. Holding up the assorted fruit and vegies to the dolls.

Olive was very busy exploring the room, she found the dress up basket, wanting to be a pretty ballerina Mel helped Olive put the tutu on. It wasn’t long before her friends joined her. Parker became a Dr; Winston placed the bear ears on top of his head before turning into a superhero!! Isla and Olivia took turns wearing the workman’s vest before Olivia also turned into a superhero wearing the red cape and flying around the room. Home corner was also very popular, there was lots of cooking using the pots and pans and playing food on plates. Bella held up the broccoli to show Mel, in her clearest voice Bella yelled “broccoli Mel” you are so clever Bella!!

Miss Otavia sat with her friends on the floor. Olive found the drum and began banging it with Miss Otavia, making their own music. Isla joined in sharing lots of smile and giggles as they played away on the drum together.

Bella and Olive also spent time playing with the coloured sensory toys, as they pressed each colour, they attempted to name them. Most colours Olive named “black”. Once Mel told Olive the correct colour, Olive repeated it to Mel. Bella named Yellow and Red and with some encouragement from Mel attempted naming all the other colours too.

It was time to pack away  our toys to our “clean up song”. Singing Bee, bee bumble be we transitioned to washing our hands and sitting at the table. This morning we had coconut strawberry delight and fresh fruit for our morning tea.

Continuing today with some exciting science experiments for National Science week today we had two experiments for our babies to engage in. The magic rainbow cloud and some slimy blue goop.

Over on the sensory tray Miss Otavia had set up another touch and feel experiment. It was squishy, gooey, wet, and slimy blue goop!!! Goop is a fun material to play with: At one moment it’s a solid, and at the next it’s a liquid…it’s unbelievably silly to play with, our babies. get lost in the strange sensation of its texture.

Mixing corn flour, water, and blue food colouring. Miss Otavia spread the goop all over the tray. Winston, Olivia, Olive, Parker, and Matthew loved this one, running their fingers through the goop when it was sticky and gooey and watching as it became hard and powdery. Olive held her hands up to Mel, showing her how dirty and covered in goop they were. It was very messy but so much fun!!

After our science experiments we cleaned up a little and began exploring the yard. Isla began going up and down the slide while sharing cheeky smiles with her educators. Winston played a game of peek a boo with Mel, hiding behind the pillar and giggling every time Mel said “Boo!!” Parker was moving the sensory bottles around the yard, placing them into the pram and pushing till she decided to place them elsewhere. Olive and Winston also had turns playing on the slide. Bella and Olivia were following each other around the yard pushing the fire trucks. Matthew spent extra time playing with he goop as he really enjoyed this activity.

Today for group time we all sat together outside before lunch to sing nursery rhymes. We sang “Open, shut them”, then Mel asked her friends what they would like Mel to sing next. Olive said: Wheels on bus!!” in her loudest voice. So, we all sung and did the actions together. Matthew loves “if you’re happy and you know it” doing all the actions while smiling along to the song. We also did the actions to “row, row your boat” this one is Isla’s favourite and then Mel asked all her friends to stand up for “Ring a ring a Rosy” Parker, Olivia and Olive loved this one so much, we did it over an over as they thought it was so funny when we all fell to the ground, sharing lots of laughter together.

We then sang “Bee, bee bumble bee” as we took turns to wash our hands and clean up for lunch and rest time. Bella and Parker are getting so good at saying their own name on que, sometimes they say each other’s name instead of their own. As we do this name recognition more often, we will all be saying our own names.

For lunch today we enjoyed yummy butter chicken and turmeric rice. After we finished our lunch some of us enjoyed our bottles on the pillows before laying on our mattress, drifting off to sleep to some soft relaxing music.

Our afternoons play will depend on the weather as its a little cooler today. We will plan to head back outside to burn off some energy with child led activities and venture back indoors if it becomes too chilly.

Thank you babies for another amazing day, see you all very soon. 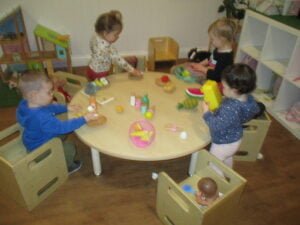 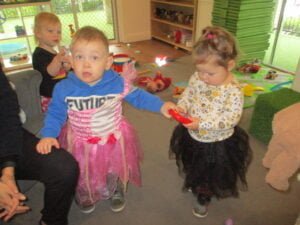 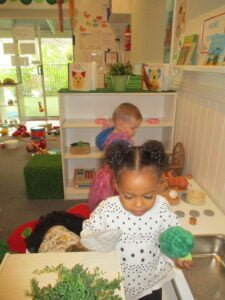 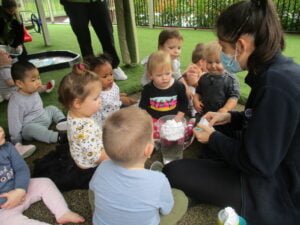 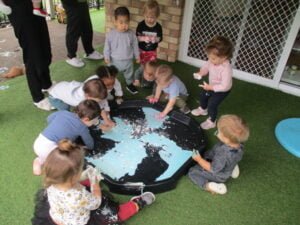 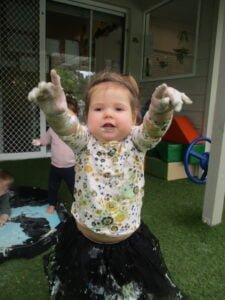 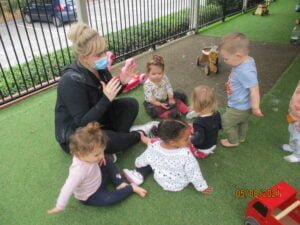 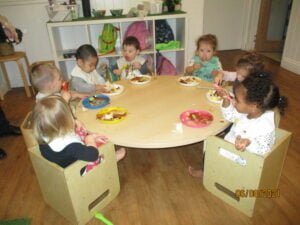