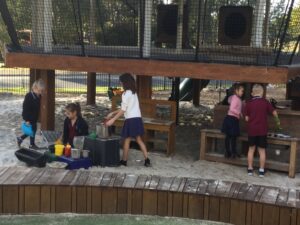 Outdoors the children engaged in group play with the mud kitchen in the sand pit. “We are going to see who has the best cookies and cupcakes” announced Hazel. “It’s like a bake off” added Tia. The children added water and sand to various different vessels, stirring, moulding and sprinkling sand on top. Indoors there was cubby houses from sheets and tables, role playing families. We gave out a bunch the Woolworths sports cards. Discussions and swapping of cards cards caused quite a positive interactive hype. Transition to school as suggested by Tia, catch the ball and tell us if your going to the Gold Coast show, if not what will you do instead.

This afternoon there was a few of the children weren’t treating others nicely soonce back at after school Care we read in our group time a story called “How to fill up your bucket”. Group discussions and a calm afternoonof followed. Friendships were reformed and respectful play experiences were enjoyed. For great listening everyone received a Riversdale dollar while Lucy, Scarlett and Sienna had saved up enough dollars to pick from the prize box. Tia and Hazel played doctors while others took turns to play rounds of table tennis. Construction had the children making patterns on the light box and creating tracks and dominos.