It has been so good to see everyone today. We missed all your beautiful smiles. We also welcomed Miss Bek back today.

A little shout out to Charlotte who is at Kindy celebrating her birthday with us! HAPPY BIRTHDAY CHARLOTTE 🙂 Today she turned 4.

As the morning began we spent the initial part of our morning inside the room as the school kids were outside. We welcomed Ivy, Cruiz, Myla and Everlea first off, this morning’s play was led by Ivy who headed for the elastic bands and boards. Lincoln and Cruiz joined her and they all created their own spiderwebs. Myla and Everlea began playing with the animals before shortly bringing the big dinosaurs to the table with the elastic bands. When asked what they were doing Everlea responded “now they have a necklace”, Everlea gave the T-Rex a variety of coloured necklaces whilst Myla gave the stegosaurus a colourful tail. As the school kids headed of we were then able to head outside for some fun! Whilst outside we welcomed the rest of our friends, Ariana, Bjorn, Charlotte, Madalyn, Delila, Harrison, Amelia, Cohen, Harper, Grace, Sayde, Henry and Colton.

Cruiz and Henry raced towards one of the bright new balls that Miss Emma brought in for us to play, Cruiz got to the ball first which then led into them playing a game of catch. Cruiz ran around the playground as Henry tried to catch him, they then tumbled on to the mat, laughing whilst rolling around on the floor. Colton, Lincoln, Sayde and Cohen got the other ball, with Colton having a turn first. They headed up the hill, rolled the ball down the hill and around and around they ran. They took turns at being the ball holder and the chasers. Harrison, Ariana, Harper and Charlotte in and amongst the sand, they were participating in some imaginary role play, from what could be heard they were creating a magical potion as Ariana could be overheard saying “This spoon has magic mellow that will make the rainbow”. Myla, Madalyn and Everlea had a go on the bikes this morning, Everlea was leading the way around the track as Madalyn gave Myla a lift. Myla had stuck the big pink exercise ball on top of the bike, she sat on top of the ball, Madalyn showing so much achievement of being able to push herself and Myla on the bike. Bjorn, Delila and Ivy hung out with Miss Tiff on the balancing gymnastic equipment, where we had to put one foot on one side of the seesaw and the other foot on the other and try to balance, this proved difficult for all until Ivy found a way to do it! We had to put our feet really close to the middle, allowing us to balance easier. Amelia and Grace spent some time with Senior Kindy friends building towers with the little building piece.

Morning tea arrived so we headed inside, we washed our hands and collected our drink bottles. As we were enjoying our morning tea Colton asked if we could watch a video about some animals, Miss Tiff responded clarifying what she heard “you would like to watch a video that has animals in?” Colton’s responded with a YES! As well as the rest of the class all saying YES, YES, YES! So Miss Bek found some national geographic videos to watch for group time. We started our group time off with our acknowledgement to land and our good morning song. We completed our days of the week with Harper being able to tell us that today is Tuesday, Harrison saying that yesterday was Monday and Lincoln telling us that tomorrow is Wednesday. Delila was our weather bird who reported that it is a sunny and warm day. We then watched a video about all the animals that live in the jungle with everyone being able to name the animals that we saw. We then learnt about Lions and cheaters with Lincoln and Harrison being able to explain the difference between the two species. Once the video had finished Miss Bek and Miss Tiff asked if the children wanted to make their own lion’s mane ! With a unanimous yes, we headed outside to go on a hunt for leaves, we then returned to the classroom and painted/glued our piece of paper and then stuck the leaves on to make our lion’s mane.

We then tidied up and headed outside to enjoy some more sun before lunch and rest time.

Our meals for today; 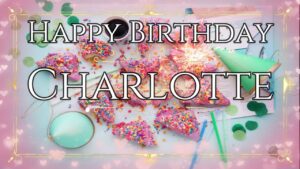 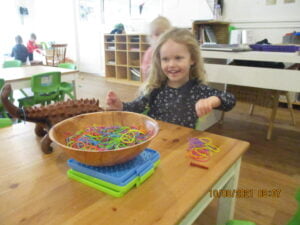 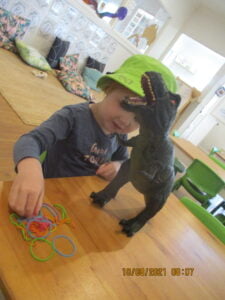 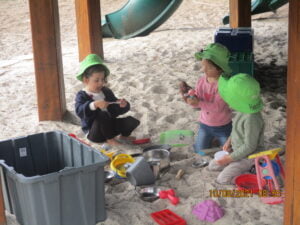 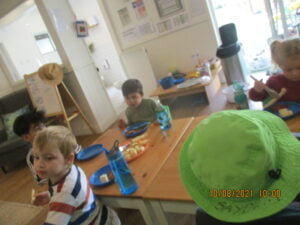 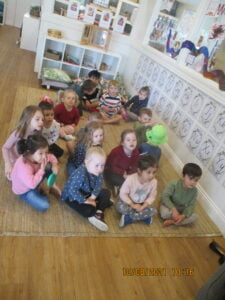 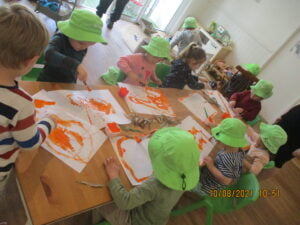