NHello OSHC families, welcome back to another new week. This morning children drew and coloured in pictures, enhancing creativity and fine motor skills. Jordan used his book “Dog man” as a reference to learn step by step process of how to draw the character. Outdoors Lucas and Jordan  played a game of soccer with the goal nets either side of the playground. Matilda, Wynter and Tia used bikes and scooters to travel in between platforms as the floor was lava. Indoors As an extension from 18.8.21 Everyone gathered around the large flat tough tray to create a different version of Kinnetic sand. To make the base we started with cornflour and water. There was lots of oo’s and ahh’s as they experimented with the texture. “It melts on my hand” said Matilda. “It’s like it’s hard but it’s soft” exclaimed Lucas. Next we added some dishwashing liquid. “It doesn’t make much difference but it smells nice” said Wynter. I asked if we should add some sand. “Yes” yelled the children unanimously. As I poured cups of sand into the centre of the tray, many hand grabbed the sand to mix into their cornflour and liquid soap. Next I opened a jar of Elmer’s glue, it was the consistency of slime. “ We made slime from this at school, can I hand it out.?”  asked Arianna. She divided it equally amongst the children being aware of fairness, she made sure everyone got some. Such a fun sensory experience that had the children wanting to stay rather than go to school. Transitioning to school, catch the ball and name your favourite colour. Suggested by Bobby. 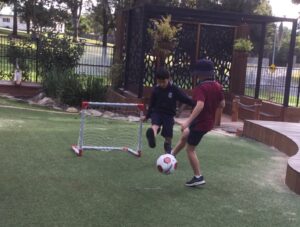 This afternoon at group time we read the story”The magnetic  dog” , the children could relate to the way their pets always get extra food from giving a magnetic look. Riversdale dollars were given for completing homework.  Lucas, Tia and Jordan continued with drawing and colouring. Tia had started to make a birthday card for her sister which she completed with a letter. Bobby and , Falagi Construction of wooden tracks complete with bridges and tunnels. Owen and Jaxon worked together make a huge magnetic fun centre. “Look at how the balls go through it” said Owen. Scarlett, Sienna, Hudson and Matilda created storyline’s replicating families. The baby got sick so I have to take the week off, said Matilda. After tracks were packed away Bobby engaged in the sensory experience of playdough.

If you would like to see some photos please let me know and I can show you them on the iPad.

Thank you for reading the OSHC page. Hope the rest of your day is filled with love & niceness. Miss Lea 🥰👋🐝🌻💚❤️🦋😷